Port Douglas held its inaugural Great Barrier Reef Marathon Festival as part of the Major Events program of both Events Queensland and Cairns Regional Council.  The Great Barrier Reef Marathon festival is locally operated by Port Douglas Events Management and has attracted runners from every state in Australia and 14 countries, making up over 500 participants.
The Great Barrier Reef Marathon festival included a 74km Ultra run (only the really crazy runners participated) , a 21 km Half Marathon,  a 10km run and a Fundy 5000 5km run.  These events took place  on Saturday 12th November 2011 and are being seen as a pre curser to the International Solar Eclipse Marathon which is being held in Port Douglas in November in 2012.
What a fantastic day to be involved in.  Mick and I as Mangers at Nautilus Holiday Apartments were only too happy to be volunteers and help organize this wonderful day.  We were roped in during the last few weeks of the event when the organizers were a bit overrun with jobs.  Mick and I organized the 8 water stations which provided runners with much needed rehydration throughout their runs.  Apart from all the pre preparation, this meant an early start for us on Saturday morning 5am, checking that the local volunteer businesses had set up and had all the necessary gear.  These stations not only provided water but the volunteers were there to cheer on and encourage the runners, as you can imagine in such long and grueling events even a small amount of encouragement can provide a huge psychological boost.  By all accounts the volunteers had a fantastic day, it was long and hot but everyone we spoke to said they would be back next year “with bells on”. 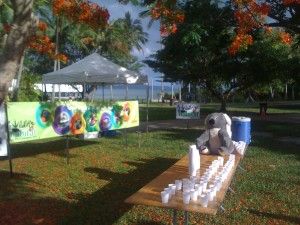 The first runners, the Ultras started in Cairns at approx 5 am.  There was a group of  approx 45 runners in this event , the first runner to the finish line arrived at approx 12 noon and the last runner arrived at the finish line at approx 4pm.    The ultra course was diverse and obviously very very challenging,  it covered hills, road, rainforest and beach but according to some of the participants was one of the best organized, well marked and well manned courses they had done.
The 21Km (half marathon) attracted the most runners.  This was the Steve Moneghetti  inaugural run.  Steve is the ambassador of this event, he ran the event and came in first which was no surprise, Nick Carling a local Port Douglas athlete came in third.     Steve mentioned that although he is now retired he couldn`t miss an opportunity to be a part of something so special in such a beautiful place as Port Douglas.
The 10km run started at 6.45am and attracted a field of approx 100 runners.    Many of these runners were attempting the 10k for the first time.  A group of ladies from Vision Personal Training at Bundall on the Gold Coast entered the event as a team, they hired a house in Port Douglas and made a mini holiday of the event.  Michelle the director of Vision Personal Training ran the Ultra and then attended the after party looking like she had had a day on Four Mile Beach; she even had her high heels on!!!
I participated in the in the Fundy 5000 (5kms), this was for the novice runner or for those of us who aspire to bigger and better things next time!! You could walk, run, push a pram, or even ride a scooter (non motorized).  Like a lot of the 60 or so participants I ran this without training (or very little) with a few walking spells in between and was happy just to finish.   The “Fundy” raised funds for our local charity here in Port Douglas KIND, this charity assists local children who have terminal or debilitating illnesses.

The Marathon was finished off on Saturday night with a dinner at local restaurant Lure.  It was fantastic to see so many of the participants enjoy the beautiful meal provided by Lure and to enjoy hearing some of the stories about the day.  Steve Moneghetti spoke on the night.  Steve is a very relaxed genuine sort of person who has run in events all over the world.  He was very impressed with the organization of the day, he loves the Port Douglas region and the people here and he was honored to be ambassador to such a great event which will only attract more and more people to this beautiful part of the world.
Like any inaugural event there will need to be some tweaking here and there but listening to many of the participants it was a very well run (for want of a better word), well attended event in one of the most beautiful places in Australia, Port Douglas and Mick and Sue Managers at Nautilus Holiday Apartments are very happy to have been involved in this wonderful event and who knows, next year it may be the 10k run for me!!! 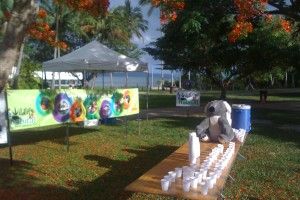 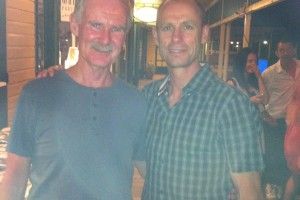 We encourage anyone with an interest in running or just keeping fit to take a look at the web site http://www.greatbarrierreefmarathon.com.au and think about participating in future Port Douglas Marathon Festivals. Nautilus Apartments at Port Douglas offers great accommodation, perfect if you are wanting to compete and treat yourself to a holiday after the event. Enjoy accommodation close to 4 Mile Beach and Port Douglas`s Macrossan St with its boutique shopping, restaurants and cafes.

Ring us today at Nautilus Apartments to book your accommodation for the upcoming Great Barrier Reef Marathon.